A potential downside risk to the economic performance could be the high household debt in case of sharp house price decreases and interest rate increases. 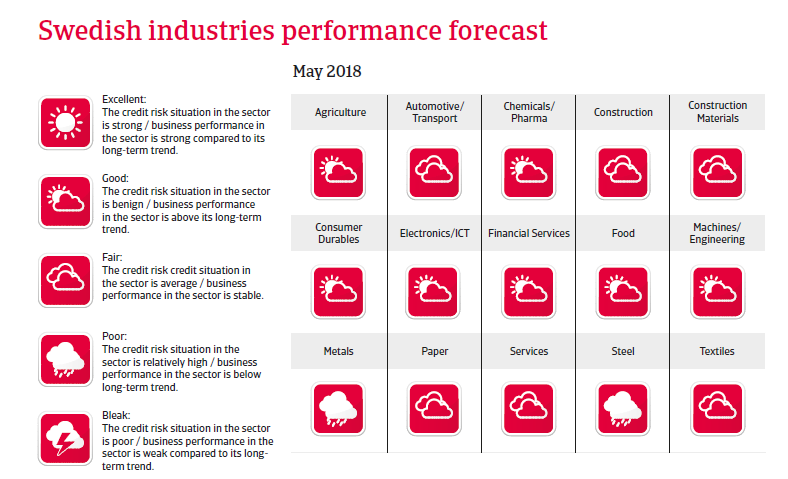 Swedish business insolvencies increased 5.6% in 2017 after three years of annual decreases. However, in 2018 a turnaround is expected, with a 3% decrease forecast. 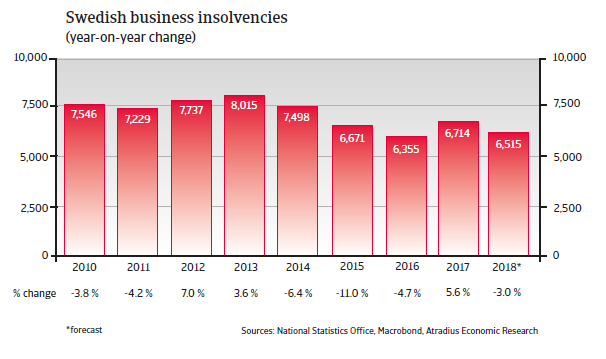 Growth slows down in 2018, but remains robust

The Swedish economy is forecast to grow 2.4% in 2018 after increasing 2.7% in 2017. Supported by negative interest rates, both household consumption and investment growth are expected to continue, although at a lower rate than in previous years.

In order to combat deflation and to weaken the currency, the Swedish Central Bank has repeatedly lowered the repo rate since July 2014, which has been -0.5% since February 2016. Inflation picked up again in 2017 and is expected to remain close to 2% in 2018. The expansionary monetary policy has driven investments and asset prices.

A potential downside risk to the economy could be high household debt, triggered by housing demand and easy access to credit. In 2017 the household debt-to-disposable-income-ratio was more than 180%, making private households vulnerable to sharp house price decreases and interest rate increases.

The use of credit terms for B2B sales by respondents in Western Europe decreased slightly compared to 2016, stressing the challenging business environment.

Most businesses in the automotive sector should be financially resilient enough to cope with some minor volatility in demand or exchange rate fluctuations.