Although Mexico is well-positioned to withstand shocks, as its external finances remain strong, the country’s economic outlook is weakening.

This was chiefly due to slower-than-expected growth in the US, its main trading partner. Private consumption, however, remains the main engine of growth. 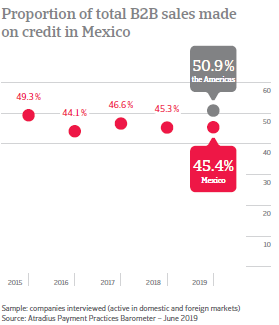 As part of various multilateral and regional trade agreements, Mexico is a key player in free trade in the global marketplace. You might therefore expect businesses in Mexico be highly inclined to offer trade credit to their B2B customers to achieve a competitive advantage. To the contrary, current survey findings reveal that respondents prefer the safety of cash-based sales. On average, over the past year, 54.6% of the total value of respondents (domestic and export) B2B sales was on cash, and 45.4% on credit. It is worth mentioning that the percentage of credit-based sales recorded in Mexico is approximately the same as that recorded in Brazil (46.4%), and easily the lowest of the USMCA countries (55.2% in the US and 57.2% in Canada). This reflects the less developed economies of Mexico and Brazil compared to those of the US and Canada. We have also seen a decrease in export flows from Mexico to Canada (down 7% on average) and to the US (averaging 3% less) over the past year, which according to 3 in 5 respondents in Mexico is due to both economic reasons and government trade policies.

While the aversion to selling on credit seems to be long embedded in the business practices of respondents from Mexico, it is also amplified by the risk prevalent during this period of renegotiation and ratification of the North American trade agreement. Uncertainty about trade relations with the US and Canada increased trade credit risk on multiple levels in 2018 resulting in more stringent payment terms for B2B customers than last year. Based on survey findings, most Mexican respondents (84%) requested their B2B customers pay invoices faster than one year ago, within 26 days on average (down from 33 days last year). In the USMCA region, these compare to an average of 37 days in Canada (up from 25 last year) and 24 days in the US (down from 27 one year ago). Payment terms recorded in Brazil average 38 days (up from 32 days last year). 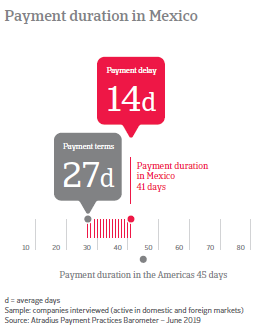 In all of the countries surveyed, assessing the creditworthiness of the buyer prior to any trade credit decision forms the basis of the credit decision. Mexican respondents (42%) do this more often than their peers in Brazil (39%) in the US (35%) and in Canada (30%). Furthermore, in line with their greater than average preference for risk free methods of payment in B2B transactions, 32% of Mexican respondents reported to either request payment on a cash basis or another secured form of payment. In order to shorten the cash conversion cycle, Mexican respondents offer discounts for early payment of invoices almost as often as they request safe methods of payment. Of note, reserving against bad debts, which is done to offset potentially inaccurate screening of the buyer’s creditworthiness, is performed notably less often by respondents in Mexico (18%), than by their peers in the US (28%) and in both Canada and Brazil (33%).

Over 25% of the total value of the invoices issued by respondents in Mexico was reported to be past due. 43 days was the average time it took Mexican respondents to turn these overdue invoices into cash (down from 66 days last year). Despite their strong focus on swiftly turning invoices into cash, most Mexican respondents (44%) reported they needed to take various measures to correct cash flow to manage liquidity constraints caused by late payment from B2B customers. This was the case for 29% of respondents in the US, 26% in Canada and 43% in Brazil. To alleviate the financial pressure on the business and protect the viability of the company, 39% of Mexican respondents (27% in the US, 29% in Canada and 39% in Brazil) needed to pay invoices to their own suppliers late. Collection of slow payments by Mexican respondents over the past year appeared to be efficient, keeping the average percentage of B2B receivables written-off as uncollectable to 2.0% (stable compared to one are ago). This compares to 1.4% in Canada, 1.3% in the US and to 2.5% in Brazil.

Mexican respondents appear to have a very optimistic view about the outlook of their B2B customers’ payment behaviour over the next months. 44% of respondents expect an improvement. 27% (compared to 33% in the U.S. and 21% in Canada) expect payment behaviour to worsen, having a negative impact on their cash flow. When asked to indicate the credit management tools and techniques they will use over the coming months, 63% of Mexican respondents said that they will request cash payment on B2B transactions more often. Requesting secured forms of payment, checking buyers’ creditworthiness and an increased focus on collecting overdue invoices are measures that an almost equal number of Mexican respondents said they will do over the coming months.

Overview of payment practices in Mexico

Trade credit risk is highest in the construction sector, and lowest in the chemicals sector

The value of overdue invoices is highest in the construction sector at 35.0% of the total value of B2B invoices issued by Mexican respondents. The agri-food sector follows at 28.3. The chemicals sector recorded a low of 12%.

The ICT/electronics sector reported the highest proportion of B2B receivables written off as uncollectable (2.3%) in the country. The agri-food sector followed at 2.2%. At the lower end of the scale, the chemical sector reported a low of 1.1%. 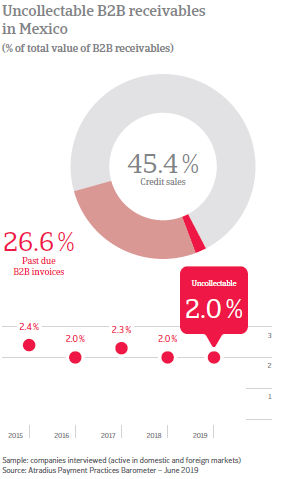 SME respondents in Mexico extended the longest and those from large enterprises the shortest average B2B payment terms (averaging 27 days and 12 days from the invoice date respectively).

SMEs took the longest to cash in overdue invoices….

…and the highest rate of uncollectable receivables

The economic impact of USMCA on Mexican-US trade is likely to be limited, as it is effectively a small modification of the pre-existing NAFTA agreement.