More respondents in Switzerland (32%) than in Western Europe (26%) will increase the use of cash, or of terms other than credit in B2B trade.

Along with Austria and Germany, Switzerland shows a quite strong aversion to the use of trade credit in transactions with business-to-business (B2B) customers.

An average of 28.7% of the total value of Swiss respondents’ sales to B2B customers was transacted on credit. This percentage, which is almost the same as that  recorded one year ago, is well below the 41.2% average for Western Europe.

The aversion to granting trade credit to B2B customers, which is  also displayed by respondents in Austria and Germany,  may be a reflection of the similarities in the business cultures of these three countries.

Respondents in Switzerland appear to be almost equally likely to grant trade credit to domestic and foreign B2B customers.

31.9% and 25.6% of the total value of domestic and foreign B2B sales respectively were transacted on credit (survey averages: 44.8% domestic and 37.7% foreign). As seen in the majority of the countries surveyed in Western Europe, this reflects a substantially uniform perception of payment risk arising from either domestic or foreign B2B trade.

90.5% of respondents in Switzerland experienced late payment of invoices by B2B customers over the past year. This ended in an average of 42.6% of the total value of B2B receivables remaining unpaid at the due date (average for Western Europe: 40%). Over the past year, late payment of invoices by domestic and foreign customers of Swiss respondents has increased by an average of 3 percentage points, occurring almost equally often from domestic and from foreign B2B customers. 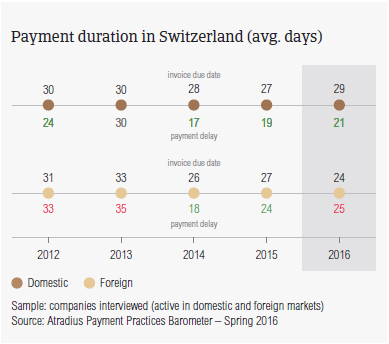 These terms are not very far from the 31 days survey average set for domestic and foreign payments. In spite of the similarities between the business cultures of Austria, Germany and Switzerland, when it comes to B2B trade, Switzerland appears to have relatively more lenient payment practices than those observed in the other two countries. Over the past year, domestic payment terms increased by two days, whereas foreign ones decreased by three days.

Swiss respondents have to wait an average of three weeks past the due date for overdue invoices to be paid. This is consistent with the average for Western Europe, and  has not changed much in the past year. As a consequence, it takes Swiss respondents an average of 50 days from invoicing to turn past due B2B credit sales into cash (survey average: 53 days).

Almost the same percentage of Swiss respondents (56.3%) as Western European respondents (57.9%) said that domestic B2B customers pay invoices late most often due to liquidity issues. The  intentional use of outstanding invoices by customers for their financial advantage is the second most often reported reason for late payment of invoices on the domestic market (26.7% of respondents in Switzerland, compared to 28.2% in Western Europe). 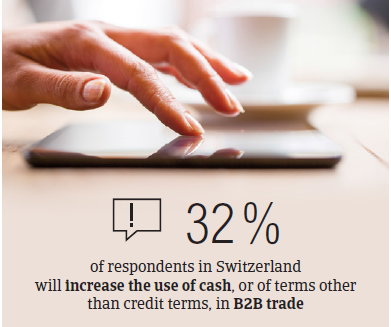 This reason appears to be most often the cause of  late payment of invoices from foreign B2B customers. This was cited by more respondents in Switzerland (28.4%) than in Western Europe (25.7%). Foreign payment delay due to the complexity of the payment procedure appears to occur almost equally often (27.3% of Swiss respondents, compared to 28.0% in Western Europe).

To protect the business against payment default by B2B customers, more respondents in Switzerland (around 32.0%) than in Western Europe (26.0%) will increase the use of cash, or of terms other than credit terms, in B2B trade.

The proportion of B2B receivables reported by Swiss respondents as uncollectable (0.9%) is notably below the 1.3% average for Western Europe. 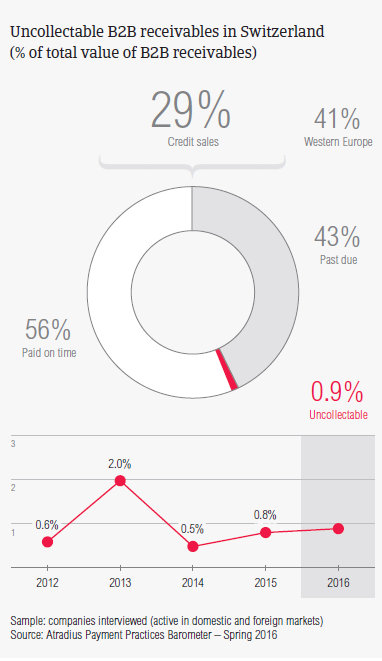 Uncollectable  domestic receivables were written off almost as often as foreign ones. Uncollectable domestic B2B receivables originate most often from the construction, consumer durables, business services and services industries.

The consumer durables industry generated an above average (for the country) proportion of overdue invoices. When it comes to the reason for payment delay, half of the respondents in Switzerland said that customers in the consumer durables industry delay payments most often due to liquidity issues. However, those in the construction industry delay invoice payment most often to use outstanding invoices for their financial advantage (52.0% of respondents).

Insolvencies are forecast to fall only 3% across advanced markets in 2016, the worst performance since 2012.

Natural gas prices have fallen significantly in Asia and Europe on the back of the sliding oil price. As more LNG comes on the market regional prices are set to remain low.