Growth is mainly sustained by strong domestic demand, reflecting higher household income and easier access to bank financing. However, export growth slowed due to lower demand from the Eurozone and a cooling down of world trade.

The total value of B2B sales made on credit is 77.8% (up from 59.1% last year), according to suppliers surveyed in Hungary. This is above the 67.2% average for Eastern Europe, and is the third highest in the region after the Czech Republic (87.6%) and Slovakia (91.5%). Hungary’s increased proportion of B2B credit sales most probably reflects robust domestic demand and a more frequent use of trade credit in order to stimulate export growth. 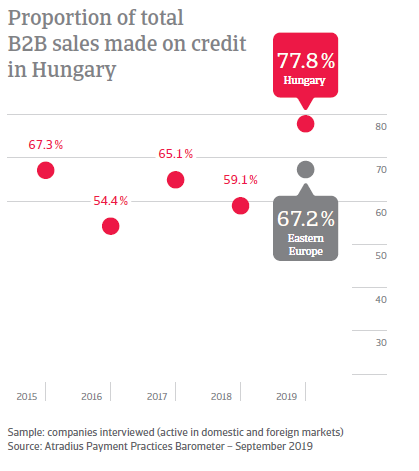 Suppliers surveyed in Hungary give their B2B customers the same amount of time as last year to settle invoices. Most Hungarian respondents (86%) granted tight payment terms averaging 29 days from invoicing. These are the shortest average payment terms in Eastern Europe, similar only to those recorded in Bulgaria (30 days), and compare to a regional average of 37 days.

The payment practices of Hungarian B2B customers improved over the past year. Consequently, respondents to our survey reported being able to cash in past due invoices significantly earlier than one year ago (on average after 36 days from invoicing down from 42 last year). Despite this, 20% of the total value of the invoices issued by respondents to their B2B customers remained outstanding at the due date. Although 86% of Hungarian respondents reported their business was not impacted by late payments from their B2B customers, pointing to a strong focus on credit management, 12% of respondents needed to pay their own suppliers late to manage potential liquidity constraints arising from late payments. Over the past year, there was an increase in the proportion of write-offs of uncollectable accounts (currently averaging 1.3% of the total value of B2B receivables up from less than 1% last year). Despite a strong focus on credit management, as seen earlier, this may point to a deterioration in the collection of overdue accounts, ultimately resulting in lower business profitability.

Most Hungarian respondents (80%) do not expect payment practices of their B2B customers to change over the coming months. Respondents expecting either an improvement or a deterioration are equally split (10% alike). 4 in 5 respondents in Hungary are of the opinion that access to external borrowing will not become more difficult over the coming months. However, should this be the case, this could result in notably higher costs which may cause a delay in investment in business growth and see a reduction in the workforce through layoffs or hire freeze. 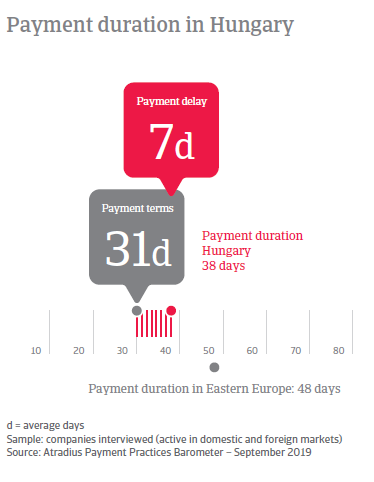 Overview of payment practices in Hungary

Hungarian respondents from the chemicals sector extended the longest payment terms to their B2B customers (averaging 40 days compared to 32 last year). The metals sector follows with 36 days (up from 20 days one year ago).  The shortest average payment terms were set by respondents in the agri-food sector (23 days), followed by the services sector (averaging 27 days).

Trade credit risk in Hungary has significantly deteriorated in both the chemicals and machines sectors, where there was an average 10% decrease in on time payments over the past year. Speed in customer payments improved in the agri-food sector over the past year. No change is evident in the credit risk trend for the construction, consumer durables and ICT/electronics sectors.

The proportion of uncollectable receivables is highest in the machines sector

The machines sector in Hungary recorded the highest proportion of B2B receivables written off as uncollectable (2.0%). The construction sector followed at 1.7%. The transport sector is at the lower end of the scale, with uncollectables averaging 1%.

Micro enterprises are the swiftest to cash in overdue invoices

Over the past year, micro enterprises in Hungary recorded the highest increase in the proportion of B2B invoices paid on time (+15% on average). Due to this variation, overdue invoices in micro enterprises now account for 17.1% of the total value of B2B invoices. Because of this improvement, micro Hungarian enterprises are now the swiftest to collect payment of invoices (29 days compared to 33 last year). Over the past year, average payment duration deteriorated for large enterprises. Despite this, they collect payment on average 8 days slower than last year. Payment practices of Hungarian SMEs’ customers improved as well. These now cash in overdue payments earlier than last year, with an invoice to cash turnaround averaging 39 days from the invoice date compared to 42 days last year.

Economic growth in Eastern Europe is projected to remain solid this year, despite losing steam mainly because of poor growth prospects for Turkey.

Hungary has become a key production base for automotive majors such as Audi, Daimler (Mercedes-Benz), Suzuki and General Motors.